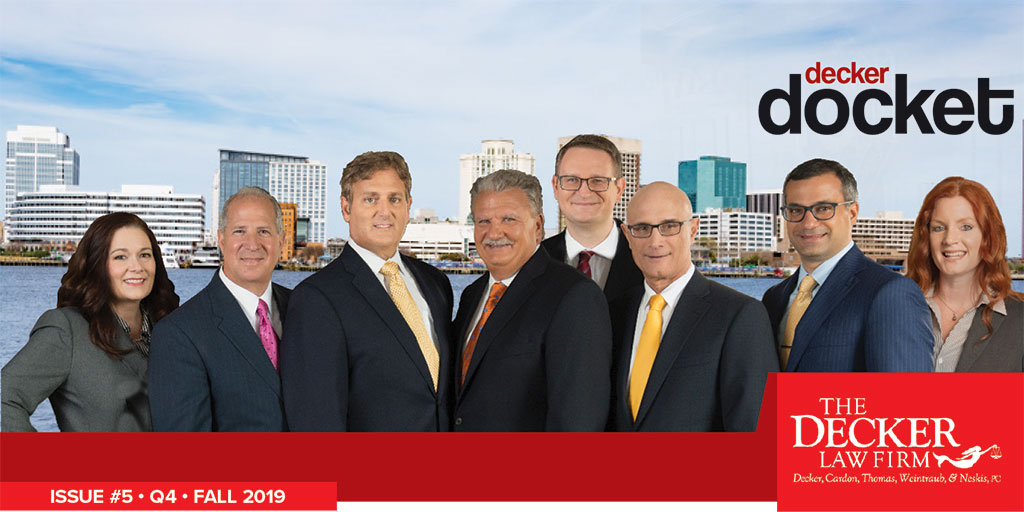 Helping People: More Than Just a Motto for Decker Law 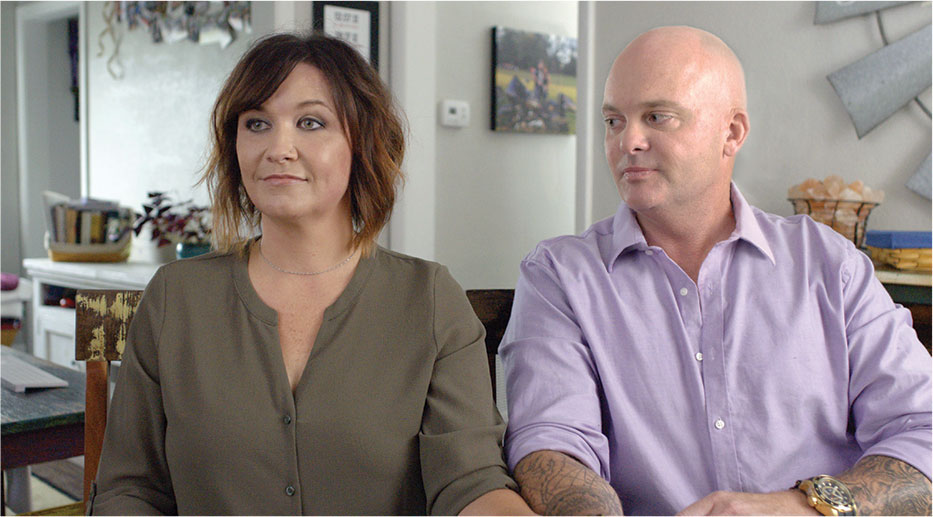 Angela Edwards was on her way home from work, enjoying the beautiful day with a ride on her motorcycle. Suddenly, a driver turned in front of her, without any indication, causing her to collide face-first with his truck. The driver of the truck fled the scene, but Angela later learned he had been intoxicated that day.

In an interview with representatives of The Decker Law Firm, Angela recalled the accident saying, “I was a very cautious rider, almost to a fault. I was always watching everything around me, always watching the other cars, and I just remember thinking that I didn’t see him in the turn lane with a turn signal on. I would have seen him and thought, ‘Okay I’ll keep my eye on you and make sure you see me.’ Because I know a lot of people don’t look for motorcycles.”

Angela woke up on the ground, surrounded by other drivers who had seen the accident and stopped to help. Some had gone on to follow the truck driver, while others stayed to help keep Angela awake and alert until the emergency responders arrived.

“I remember the look on the police officer’s face, he was kneeling over me, I remember the look on his face, and it was very concerning, and I knew it was bad. You could just tell, how someone looks at you… he almost had tears in his eyes”, Angela recalled. “I don’t really remember a lot of pain at that point, it was just wanting my husband by my side.”

Her husband, Andy, got out of a meeting at work to find 27 missed phone calls. He called her cell phone back and was greeted by the police officer at the scene. Her husband’s first request of the officer – “Please tell me she’s not dead.”

Andy raced from work to meet Angela and the paramedics at the hospital. When asked what was going through his head when he first saw her after the accident, Andy replied, “What do we do? I don’t know how the doctors are going to fix her… is she going to live?”

Angela’s helmet saved her life that day, but she still suffered severe blunt force trauma to her face. She lost 5 teeth and required a bone graft to reconstruct her jaw. Her right wrist was seriously injured, leaving no ligaments, and her pelvis was fractured in 4 places, causing her to require a wheelchair for 3 months. Angela will soon have her 14th surgery since the accident – a procedure to fuse her wrist, in the hopes that it will reduce her pain.

The day after the accident, with Angela on day two of a multi-week hospital stay, a close friend suggested that they reach out to an attorney and recommended the Decker Law Firm. Her husband made a phone call to the firm, and that same day received a visit. Angela shared the experience saying, “I remember them standing at the end of my [hospital] bed, speaking with my husband. They were so kind, and so caring, and just made us feel at ease.” Shortly after her release from the hospital, Attorney Joel Weintraub met Angela and Andy at their home. During this home visit, Joel obtained more detailed information about the accident and Angela’s injuries, taking the time to answer any questions the couple had about how Angela’s claim would proceed.

The Decker Law Firm, a Norfolk based Personal Injury firm, was opened over 50 years ago by Peter Decker Jr. (1936-2012). When Decker Jr. started practicing law, he had only one goal in mind: helping people. His mission to help remains the priority for all attorneys and staff at the firm, including his son, Peter Decker III. When Joel Weintraub, a Partner at Decker Law, took Angela’s case, his only priority was getting her the best possible result.

Angela almost bled out on her way to the hospital and told us she considers herself lucky to be alive. Andy shares the feeling of luck saying, “Without her… it’s just lonely. I’m glad we were able to get the attention and doctors she needed. A lot of that is because of The Decker Law Firm. They guided me in what was best to do. They said, ‘Relax, we’ve got this. You do your part with her.’”

“It’s been great to see her strength, and that’s what’s great about The Decker Law Firm – they took care of the fiscal piece, the legality piece, and I got to take care of her”, Andy commented. “The Decker Law Firm definitely guided me through the process and what to do, and actually told me things that I didn’t even know we were entitled to.” He continued, saying, “The money was nice, it has helped because she has lost her job, she can’t work. Even if she had a job, she would have to take off work every month for two or three weeks because she needs another surgery. That money has helped supplement the income there.”

Looking back on their journey as a couple since the accident, Angela said, “There’s so many things that he did for me that you shouldn’t have to ask a spouse to do at our age. He fed me, he nursed me back to health, he helped me walk, he pushed me. There’s been so many days I’ve gone through where I don’t want to do this anymore. I don’t want to go through another surgery. And he’s right there, saying how much he loves me right before I go into the OR, and he’s right there when I come out and wake up.”

Angela was an active marathoner before her accident and can no longer run due to the injuries she suffered on her pelvis. With both of her favorite hobbies, running and riding, off the table, she and her husband have been exploring new activities. “We are just finding new things that we like to do together; we go out and go antiquing, try new restaurants, go to museums… just a bucket list of things to do to keep our minds off the things we don’t have any longer.” She shared that in addition to this bucket list, she and Andy have shifted their love of motorcycles over to a less dangerous mode of transportation – cars. Andy shared the sentiment saying, “I have my wife, she’s beautiful… we’ll find other things to do.”

Unfortunately, Angela’s accident is not unique, even to her own family. Her older brother was tragically killed while riding his bike – by none other than a drunk driver. “The toll this took on my mom was extremely difficult because she lost her oldest – and then to almost lose her youngest to another drunk driver is …. I promised my mom, no more.”, Angela said.

Angela says she would recommend The Decker Law Firm to anyone, saying, “They were amazing, I don’t think I could find the words to speak highly enough about Joel and The Decker Law firm. They were just absolutely amazing.” If you have been in an accident caused by another person’s negligence, reach out to the experienced attorneys at The Decker Law Firm. Call them at 757.622.3317 for your free consultation. You may be entitled to more than you think. 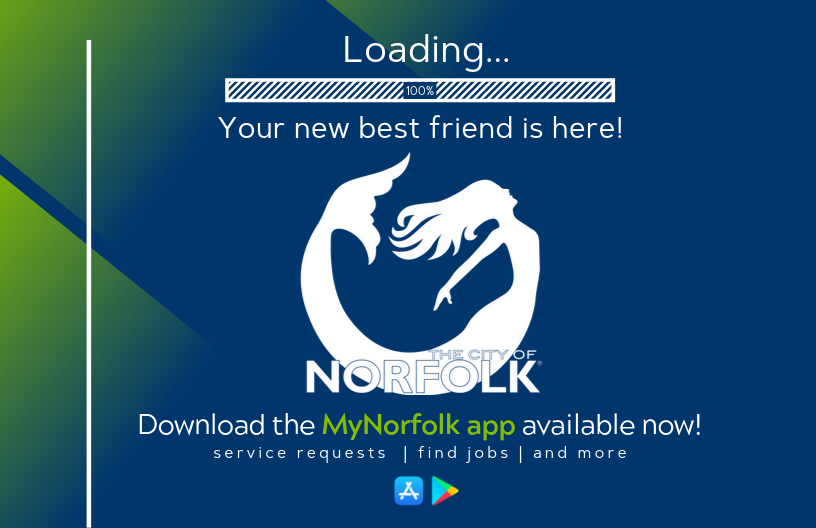 At the beginning of October 2019, Norfolk city rolled out an all new companion to their Norfolk Cares Call Center. The new MyNorfolk website and mobile app offer a portal where any citizen can submit service requests. The services also include handy city information, such as job listings, trash & recycling schedules, permit requirements, public safety numbers, and more.

MyNorfolk offers 145 different service requests categories, ranging from requesting a change of address for your water bill, to graffiti removal, “Chicken Concerns”, and everything in-between. MyNorfolk allows residents to not only submit these requests, but to track their progress in real-time. Requests can be submitted at any time, but the City notes that fulfillment will only take place during regular business hours.

Thank you to everyone who was able to come out to O’Connor Brewing to celebrate the 5th Annual Brews & BBQ fundraiser! This event offered all you can eat & drink for a $20 donation, benefiting the Peter Decker Children’s Charity (PDCC). We were able to raise over $30,000 for some incredible children’s charities!

PDCC is comprised of local volunteers partnering with local businesses to support local (and national) children charities. The mission is to help children all over the world live a long, healthy and meaningful life.

Motorcycle Safety: Not Just For Bikers

According to the National Highway Traffic Safety Administration (NHTSA), 5,172 motorcyclists were killed in 2017. While this statistic has decreased in recent years, we would like to take the opportunity to share some essential motorcycle safety tips for motorcycle rides as well as other drivers on the road.

Motorcycle Safety for Other Motorists 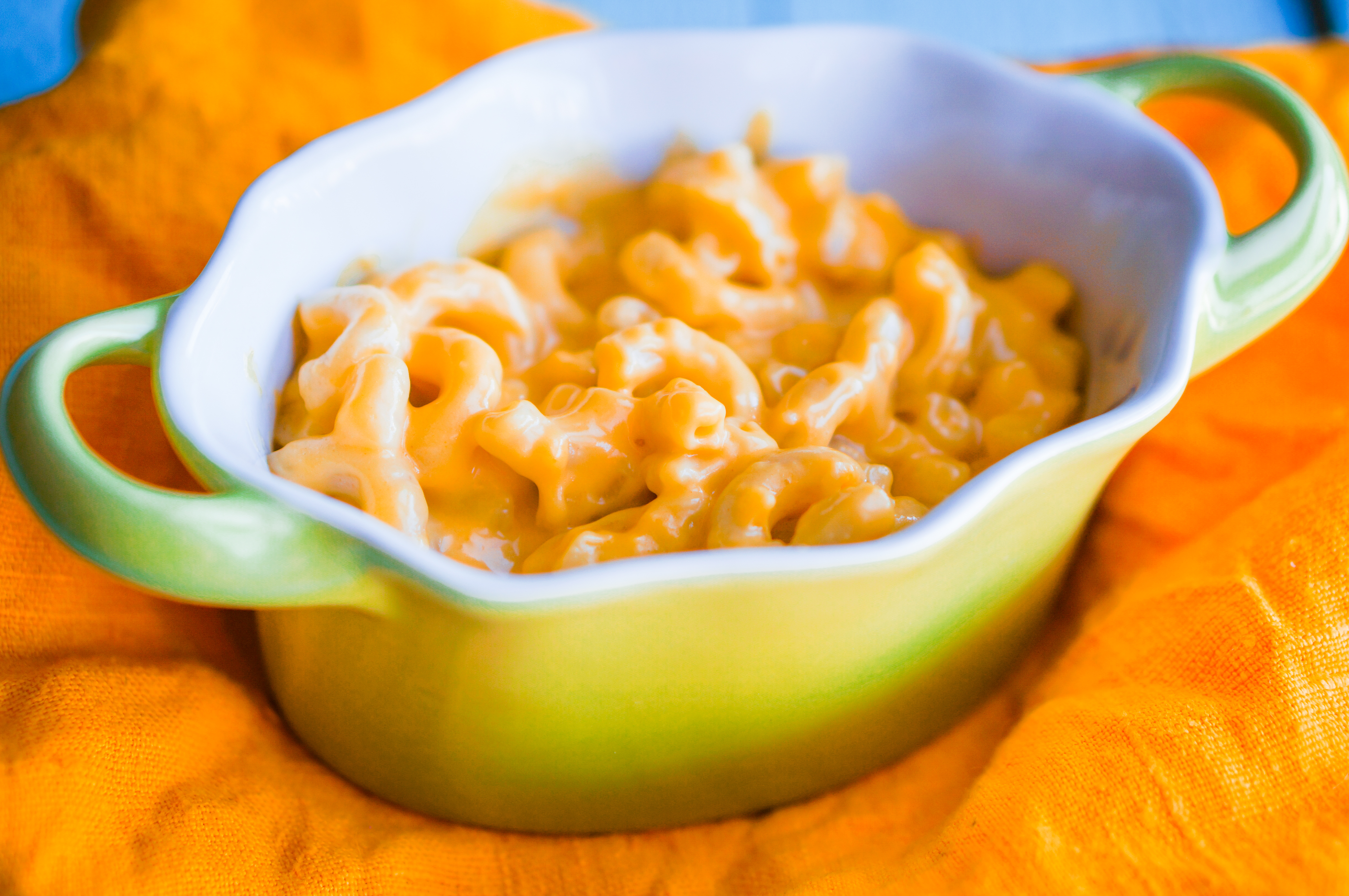 Halloween is one of our FAVORITE times of the year. Our staff goes all out for our annual Halloween party. Check out some of these incredible costumes from the last few years!

Check out all of this year’s photos and our 2019 winners on our website! Here’s a sneak preview. 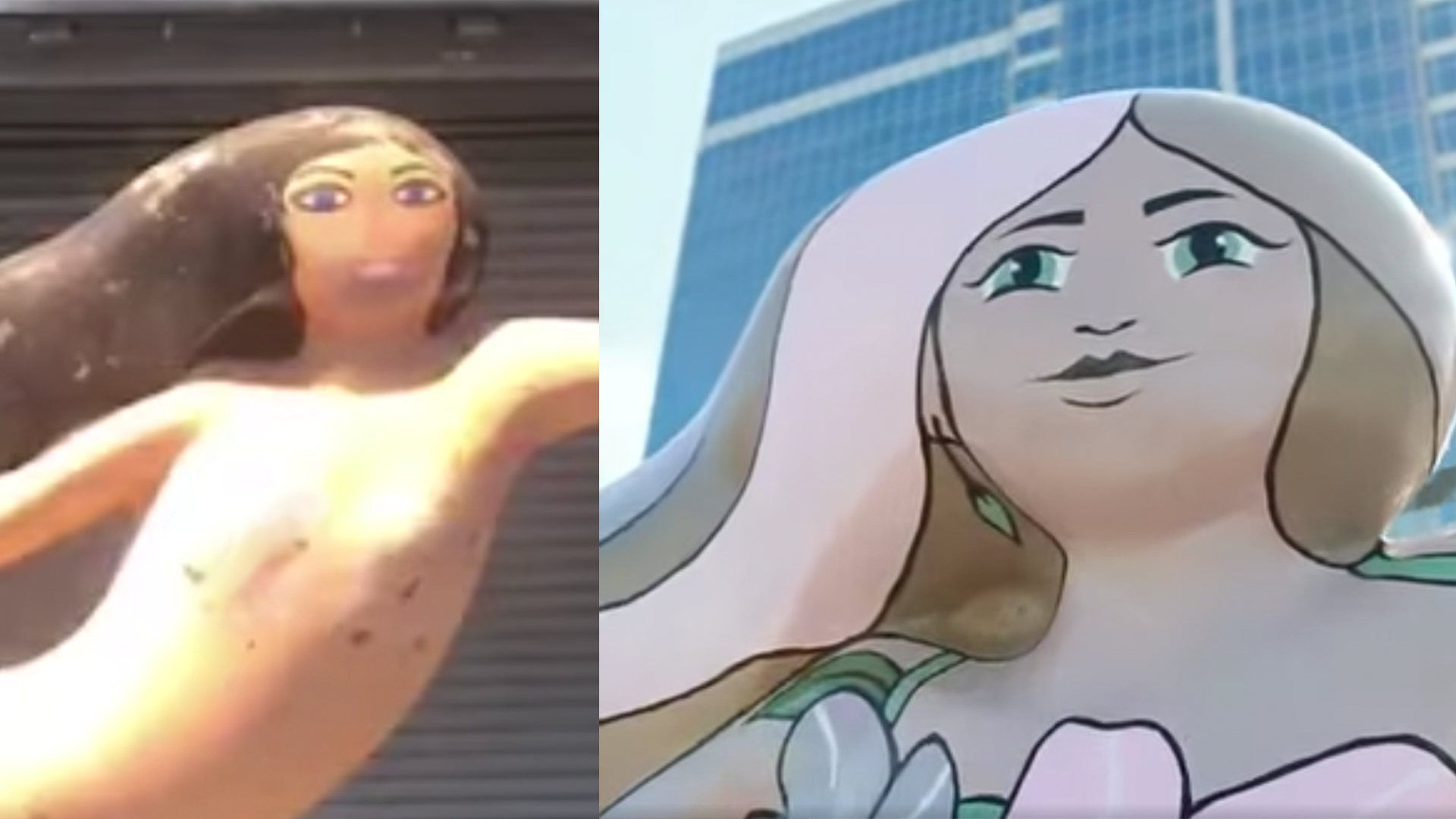 You can come by and visit her at 1 Waterside Drive, Norfolk VA.

The Nutcracker at Chrysler Hall

Tchaikovsky’s brilliant ballet score comes to life for this magical collaboration between Richmond Ballet, The State Ballet of Virginia, and the Virginia Symphony Orchestra! From a battle beneath the branches of a mystical Christmas tree, to a winter white forest, and then off to a far-off kingdom of delectable sweets, this dazzling production is sure to bring joy to everyone’s December.

This festive outdoor wonderland will feature unique and local crafters, a massive Yule Log bonfire, Christmas caroling with a take home carol book, and also a visit from the big-man himself, Santa Claus. During the festivities, hot chocolate, ciders, seasonal craft beer, mulled wine and other holiday treats will be available for purchase.

HAMILTON is the story of American’s Founding Father Alexander Hamilton, an immigrant from the West Indies who became George Washington’s right-hand man during the Revolutionary War and was the new nation’s first Treasury Secretary. Featuring a score that blends hip-hop, jazz, blues, rap, R&B, and Broadway, HAMILTON is the story of America then, as told by America now.

Don’t miss Virginia’s favorite holiday tradition. Drive through our 25th annual light show extravaganza for a magical holiday experience. During this event, the Garden is transformed into a winter wonderland bringing the four seasons to life.