Rear-end collisions are the most common type of car accident in the United States. In fact, there are over 1 million rear end collision cases every year, many of which cause injury. And an unfortunate number of them are fatal. Anyone who spends time on the road would benefit greatly from not only knowing what to do if they get in a rear-end collision but also how to avoid one in the first place.

Continue reading and we’ll walk you through everything you need to know about these all-too-common incidents.

One of the most important things to realize as a driver is that no matter how careful you are, you can’t control how careful other drivers are. And you especially don’t have much control when you get hit from behind if you’re the vehicle in front.

Still, by knowing what the most common causes are for rear-end collisions, you can know how to hopefully avoid them or what to do if you sustain an injury after a rear end collision.

Pretty much all jurisdictions have some law on the books stating that tailgating is illegal and punishable with fines. Almost one-third of rear-end collisions are due to tailgating.

There are many reasons why the driver in front might stop short. Sometimes it’s due to a lapse in good judgment although many times it’s because of something suddenly coming in front of them.

Sudden stops can be especially dangerous if the front car is tall and the rear vehicle can’t see anything in front of the first car.

How to Avoid Rear-Ending Someone

Actually, there are two two-second rules. Both of which are helpful ways to avoid rear-ending someone else.

The first two-second rule states that you should never keep your eyes off the road for more than two seconds. Within just that short time frame, disaster can strike. You can end up veering into another lane, the driver in front of you may stop short, or someone or something might run out in front of you.

The other two-second rule has to do with distance. When driving, pick a point somewhere on the road. Once the driver in front of you passed that point, it should take you at least two seconds to reach that point. This is generally agreed to be a safe enough distance between you and the other driver so that if that driver should stop short you will have enough time to safely react.

As stated before, tailgating is the most common cause of rear-ending. You should never do it. Many drivers, when they get cut off, will tailgate as a way to express anger.

You should never let your emotions get the better of you like this on the road. A move like this can quickly and easily result in a dangerous rear-end collision. Instead, whenever someone cuts you off, you must either slow down to keep the two-second rule or safely merge into another lane.

If you drive in someone else’s blind spot, they may very well merge into your lane at some point without seeing you. And if there are vehicles on either side of you, you’ll be boxed in and have to stop suddenly, possibly leading to a rear-end collision.

How to Avoid Getting Rear-Ended

When driving, especially on the highway, it’s a good idea to glance at your side view and rearview mirrors every so often.

If you notice that the car behind you is tailgating you or speeding up behind you, you should merge into another lane to avoid a possible crash.

If you are driving on the highway, a place where cars typically drive at 60 mph or faster, you should be especially mindful of potential traffic jams.

If you notice yourself approaching standstill or extremely slow traffic, give yourself plenty of room between you and the driver in front of you when you stop.

This way, if you see a driver quickly approaching behind you, you will have room to move forward and honk your horn in hopes of getting his attention before an accident occurs. Turning on your hazard lights is another great way to draw the attention of a possibly distracted driver behind you.

Our vision is attracted to light and movement, so flashing lights on vehicles are an excellent way to get someone’s’ attention.

If you’re stopped and your lane is next to a wide median, you can also veer into the median if the driver behind you doesn’t seem like they are going to stop. This is an extreme move but absolutely worth it when the alternative is a crash.

Like all traffic accidents, rear-end collisions can result in wrongful death. With that said, many times they end in people being hurt from soft-tissue injuries which sometimes require physical therapy, lost wages and medical bills.

This type of injury makes sense considering you’re being hit from behind. Here, even at low speeds, the force of impact can end up compressing your spine as well as the disks in your lower back area.

This can lead to bulging or herniated disks.

Whiplash is when you feel stiffness and pain in your shoulder and neck area after your spine, shoulders, and neck are violently and suddenly moved. It is also referred to as hyperflexion and hyperextension.

These kinds of painful injuries can happen both at high speeds and even when the vehicle is going less than 20 mph.

When you’re in an accident and your airbags don’t deploy, your head can bang into the steering wheel in front of you. The power of this impact can fracture your jawbone and cheek, break your nose, and even tear your retina.

You can also end up bruising and cutting your face. Also, if your airbags do deploy, their force can lead to abrasions of the scalp and face.

When a rear-end collision occurs and you have your seatbelt, it’s going to hold your body firmly in place. The powerful force can lead to scrapes and bruises on the torso, shoulders, and neck.

Still, these injuries are greatly preferred to what happens when you wear no seatbelt at all. By wearing a seatbelt, you reduce your risk of being killed in a car accident by 45%. 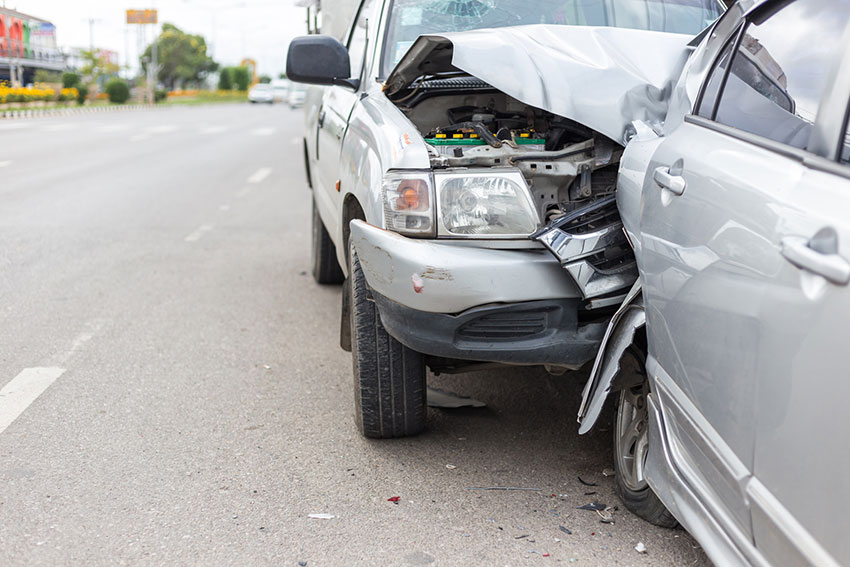 Many people wrongly assume that when a rear-end collision takes place, it’s automatically the fault of the driver furthest in back. This is not always the case but, many times, that back driver is the one who does take full liability when someone files a claim.

The reason is typically chalked up to negligence. Negligence is the word we use to describe someone’s actions that fall below a standard of care.

When on the road, all drivers take on a duty to exercise care when operating their cars. They can breach this duty in a number of ways including:

After it’s proven that a driver breached his duty, it must be proven that the breach resulted in the accident.

The driver in the rear is almost always at fault in these situations. This is because if you’re driving a safe distance behind another driver, you should have enough time to brake.

When the Front Driver Is at Fault

There are sometimes cases when the driver at the front of the line is the one who’s fully liable. Some incidents where this may occur include:

In the examples above, the driver who actually gets rear-ended would likely be the one considered negligent.

What to Do After Getting into an Accident

When you get into a car accident, whether it’s a rear-end collision or something else, there are certain steps you should take immediately after.

First, you should turn on your hazards and stop when it’s safe to do so. NEVER drive away from the scene. All states have hit-and-run laws and you will be fined and or jailed.

Move your vehicle away from traffic and try to get to the side of the road if possible.

Next, make sure that everyone is okay. If anyone is seriously injured, call an ambulance. It’s alright to communicate with the other parties to check that they are okay but otherwise it’s best to keep the chit-chat to a minimum. And NEVER apologize as this implies liability.

Then, call the police. Most jurisdictions require that the police be called if anyone is at all injured or if there is damage to a vehicle or property. You might also need to file a police report with your insurance company when you are seeking a claim.

Then, contact the insurance company. They can advise you on the next steps and what kind of information they’ll need.

If you were at all injured, you should seek medical attention as soon as possible especially as it relates to pain management. After this, contact a personal injury attorney. They are the best resource to protect your rights and help you get compensation for your injuries.

And if even the other driver doesn’t have auto insurance, you can still make a claim.

By understanding more about traffic accidents, and rear-end collisions in general, you will be more prepared the next time something like this happens to you.

Remember that you’re not alone in this. And whether you are at fault or not, you have rights and deserve to have your say.

If you were in a traffic accident or would like to learn more please contact The Decker Law Firm your car accident attorney, Contact us today for a free consultation.